Estate Planning Shortcuts: What the Gift Planner Needs to Know 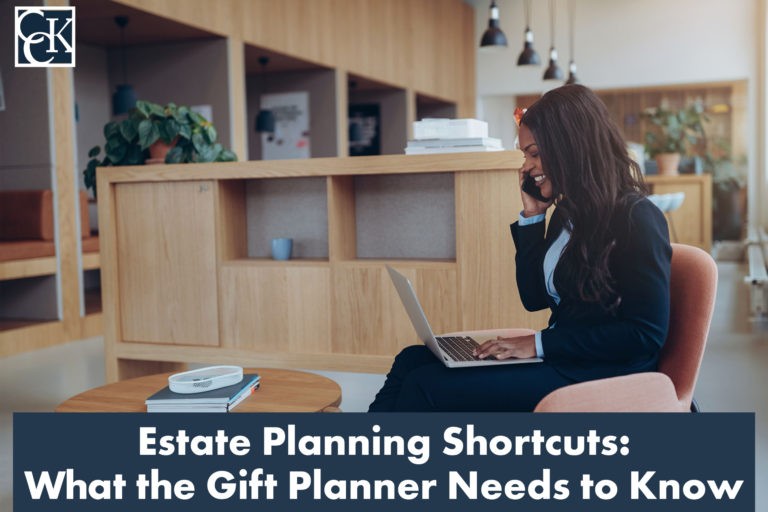 We Americans do like our shortcuts.  One-click shopping, microwave dinners, and scores of other practices have emerged in response to the magical allure of “fast and easy.”  Estate planning is no exception to this streamlining trend. The time, expense, and (sometimes) emotional impact of preparing one’s after-death instructions lead many to ignore the task (hence intestacy) or to seek easier ways of doing it.

Since the gift planner sometimes functions as the sounding board for estate planning decisions, it is useful for her to have some basic and accurate information to impart when these delicate questions arise.  Here is a brief overview of the “pros and cons” of four shortcuts that donors sometimes consider.

A testator may believe that “oral wills” are authorized by a given state.  Believe it or not, in some cases, this is (at least partially) correct.  The shortcut involved goes by the odd name of “nuncupative will.”

“Nuncupative” derives from the Latin verb nuncupare, meaning “to declare.”  The nuncupative will is a “declared” (as opposed to written) will.  Where valid in the United States, these wills are permissible only in deathbed situations or for members of the military on active duty.

Most statutes require affidavits from two disinterested persons who witnessed the declaration.  One of them is then required to make a contemporaneous written record of the testator’s instruction.   Frequently, nuncupative wills are valid only to distribute personal property of nominal value.  As an estate planning shortcut, these wills leave much to be desired.

Handwritten wills are also known as “holographic” wills.  In American law, however, the term has become synonymous with “an unwitnessed will that is entirely in the testator’s own handwriting.”  Several states – roughly half – do recognize such wills as valid, thereby offering an exception to the requirement of having two witnesses.

Where permitted, holographic wills offer an alternative preferable to intestacy, but gift planners should, at the very least, urge caution to donors considering this shortcut.  Courts tend to demand rigorous compliance with statutes permitting these wills.

Those statutes themselves sometimes have surprising idiosyncrasies:  for example, in North Carolina, in addition to the typical requirements, the validity of holographic wills is also contingent upon the will being kept with the testator’s “valuable papers” or some comparable place.

“Fill-in-the-blank” will forms where the testator writes in the material terms of the estate plan are unlikely to qualify as holographic wills.  Use of these templates is acceptable, but the formalities of execution (including witnesses) must be observed.

CCK TIP:  Handwritten changes to standard witnessed wills are apt to be disregarded by courts even in states where holographic wills are accepted.

The term “robo-wills,” or electronic wills, is used to refer to the variety of online resources that facilitate the creation of an estate plan without the assistance of a lawyer.  This shortcut has been increasing in popularity since its introduction two decades ago and doubtless will become more common and sophisticated as time progresses.

While it is impossible to give a blanket imprimatur to all the online options, those that have flourished are by and large offering a good product.  The gift planner should not discourage use of these services, especially when intestacy is the likely alternative.

CCK TIP:  We recommend that in discussing robo-wills with donors, gift planners avoid recommending any website that they (or their organization) have not personally reviewed and assessed to be satisfactory.  In addition, we encourage communication of the following cautions to anyone planning to construct a robo-will, or electronic will:

There have been television dramas in which a decedent has left behind a videotape (in the old days, a film) in which he makes a surprising and shocking disposition of his property.  As theater, that is a good device.  As a testamentary tool the video will is still in the futuristic category.

Although a handful of state statutes permit videos of a “signing ceremony” as relevant evidence concerning the validity of a will, actual video wills have not gained much traction and are not likely to do so anytime soon.

CCK TIP:  Video recordings of “signing ceremonies” can be good evidence if a will is later challenged on the grounds of incompetence or duress.  If this topic comes up in a gift planner’s discussions with a donor, it is important to ensure the testator understands that the video is not the will.  To be sure, even when the recording is used merely as evidence, it will be subject to stiff authentication requirements, and rightly so.

“Home movies” will generally be insufficient!  A growing number of estate planners are offering these videos as an adjunct to legal services.  Testators desiring these recordings should consult with counsel, as state courts have enunciated various requirements for the admissibility of such evidence.