What Does RMD-QCD Spell? A Gift Planning Opportunity 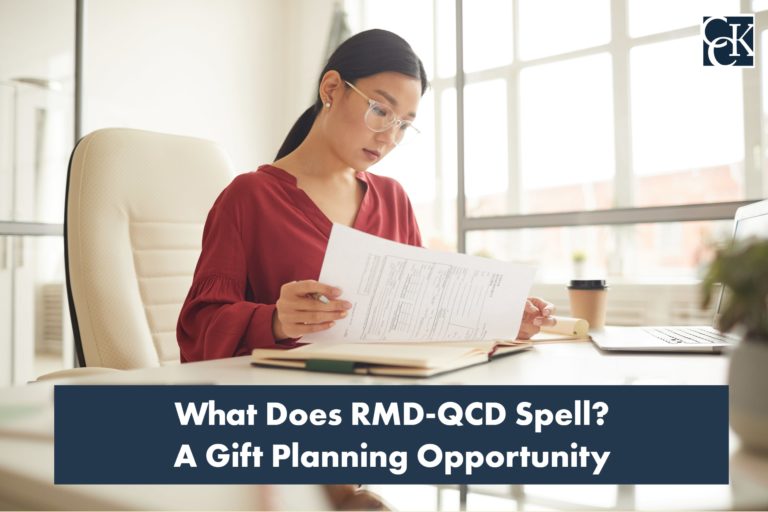 The tax incentives for some forms of charitable giving have been partially diminished by the increase in the standard deduction.  One area in which this has not happened is with “Required Minimum Distribution” (RMD) gifts.  Many charities, and even more donors, find this area confusing.  In this posting, we will try to offer some practical tips for charities and donors.  The Q & A format will help keep matters organized!

I Don’t Understand What a Required Minimum Distribution (RMD) Is.  Can You Help?

Yes, we can.  RMD means “Required Minimum Distribution.”  It is a mandatory annual withdrawal for someone 72 years of age or older who has one or more Individual Retirement Accounts (IRAs) that hold pre-tax (never taxed) money.  Upon withdrawal, the money is taxed.  The federal government offers IRAs as a tax-deferred savings method, but RMDs insure that at some point, the money is taxed.

How Much Needs To Be Withdrawn for an RMD?

It depends upon the size of the IRA or all the IRAs collectively.  It also depends on the age of the IRA owner.  If an IRA of $500,000 is owned by a 75-year-old man, the RMD is about $21,800.  A 90-year-old with the same account will have an RMD of about $43,800.  The theory is that the 90-year-old has to withdraw the money faster, since his life expectancy is lower.  The IRS provides tables that make the calculation easy.

So, RMDs Are Taxable?

Yes, they are taxable as ordinary income.  More importantly for retirees, that additional income can push them into a higher tax bracket.  That can have reverberating impacts.  Higher income can trigger additional taxes on a retiree’s Social Security payments.  It can also double or even triple the amount the retiree pays for Medicare.  The whole theory behind the so-called science of “retirement account withdrawal management” is to keep ordinary income as low as possible.

Where Do Charities Come In? Well, under a provision in the law, retirees can direct up to $100,000 a year of RMD withdrawals to a charity.  If they do that, there is no charitable deduction, but there is also no tax on the RMD.  Most important, the amount of the RMD is NOT included in the retiree’s taxable income.

So Then Where Does QCD Come In?

The mandatory withdrawal from an IRA is . . . an RMD.  If it is directed to a charity (and the rules are followed) it becomes a Qualified Charitable Distribution (QCD).  It’s “qualified” because there’s no tax.  It’s “charitable” because it is going to a charity.  And it’s a “distribution” because all money coming out of a retirement account is called a distribution.  It’s a tax thing.

We Saw the Parenthetical in the Last Answer: “And the Rules Are Followed.”  There’s Always a Hitch!  What Are the Rules?

Actually, they are fairly straightforward:

Can the Donor Give MORE Than His RMD Amount?

We thought you would never ask.  Yes, and with the same tax treatment.  However, the excess amount cannot be carried over to satisfy RMD amounts for a future year.

Do You Have Any Special Tips for Those of Us in Gift Planning?

A few key items occur to us, presented here as CCK TIPS: