Charities and Ante-Mortem Probate: Considerations for the C-Suite Executive 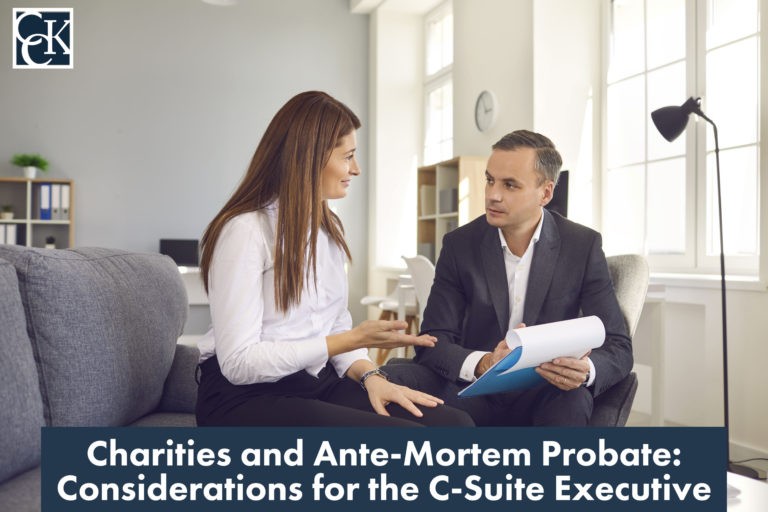 Charities do not care much about ante-mortem probate cases.  Until one of the cases hits home.  This post is an introductory essay on an obscure topic and offers some preliminary advice to nonprofit executives on ways of handling an undeniably delicate situation.

What is Ante-Mortem Probate (Also Known as “Living Probate”)?

The only states that have expressly created the opportunity for this early judicial imprimatur are Alaska, Arkansas, Nevada, North Dakota, and Ohio.  There have been creative efforts by litigators to utilize other means (such as declaratory judgment proceedings) to accomplish the same result in other states.  These attempts fail more often than they succeed, usually because of adherence to the venerable maxim that “the will does not speak until its author dies.”.

How Would a Charity Get Involved in an Ante-Mortem Probate Case?

If a will naming a charity becomes the subject of a living probate case, the charity is an “interested party” and thus receives notice and can participate.

Can a Charity File a “Living Probate” Case to Protect a Large Bequest From an Anticipated challenge From, for Example, a Disgruntled Disinherited Relative?

Those who remember early television quiz shows would call this the “$64,000 Question.”   The query raises various issues:

So, If the Charity Is Notified That an Ante-Mortem Probate Case Has Been Filed by Someone Else, Should It Just Sit On the Sidelines?

Absolutely not.  The charity has every right to participate in the case and in so doing, to protect its interests.

An ante-mortem, or “living,” probate case usually arises when a testator anticipates a post-mortem challenge to her will, often by disinherited (and therefore disgruntled) relatives.  Not surprisingly, the living probate case frequently deteriorates into an attack on the competency of the testator by those relatives.

A charity often has information that is relevant in such a dispute.  For example, gift planning representatives may have had significant interaction with the testator around the time of the execution of the will and can therefore testify to her degree of competence.

Even more frequently, a charity’s records of a testator’s long history of donations can derail an allegation by heirs that a generous charitable bequest is evidence of mental impairment sufficient to invalidate the will.

Can the Judgment in an Ante-Mortem (“Living”) Probate Case Be Challenged At the Time the Testator Dies?

Yes, again proving the adage about the “best-laid plans of mice and men.”  The most common basis for such challenges is “the missing heir/interested party.”

Suppose that Jones has a provision in her will leaving her sizable bank account to “my grandnieces and grandnephews, but not a penny to my grandchildren.”  Suppose also that the will was approved in a living probate case but notice of the proceeding was not provided to an undiscovered-but-now-resurfacing grandchild.  Such a situation could lead to the disregarding of the living probate, meaning that the entire litigation was for naught.

If a Charity Gets Few or No Bequests From the Five Living Probate States, Does All This Information Have Any Relevance?

Yes, it does, and for two reasons:

CCK TIP:  The availability of living probate should not be a worry for charities.  However, it is something that should be on the radar of the savvy nonprofit executive.  We believe that a simple policy of “participating as appropriate” in such cases will serve most organizations very well.

A more difficult question – and one that each charity must answer for itself – is whether to suggest living probate to any of its donors.  Such a suggestion could, in the right case, protect a large bequest.

However, the nonprofit executive needs to weigh that against the risks, especially whether the suggestion might constitute: